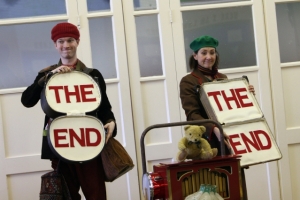 I have had the great pleasure of working with dramatists to make new plays for children and young people and the Roundabout archive holds all those scripts written in the last thirteen years. In the UK, the role of the dramaturg is usually undertaken by the director of any new play.

Many years ago when TIE was growing, the role of the writer was undertaken by a creative collective, who devised plays and programmes. This became a less than satisfying way of working. It seemed to me that often the work was unfocused and lacked theatricality.

I soon started to work with dramatists and have always valued most highly, their contribution. To discuss a variety of ideas, establish a dramatic framework, talk about characters, read a first draft, work through it in a rehearsal room then receive and read each new version as production approaches has given me great artistic satisfaction.

My co-commissions in Europe with the Thalia Theatre (Mia by Nick Wood) and Det Norske Teatret (The Island by Laura Lomas) were fascinating experiences working alongside dramaturgs whose sole concern was for the quality of the script.

The involvement of Nottingham Playhouse in both Assitej and the European Theatre Convention also led to the production of a number of new scripts that I had some hand in developing as a dramaturg and some of those plays are still performed in the repertoires of European theatres.