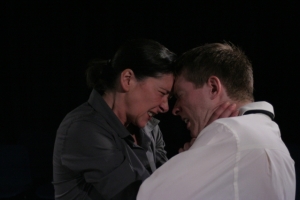 2014 Mercury Theatre, Colchester directed YOU CAN ALWAYS HAND THEM BACK. New Theatre Nottingham THE GIRL WITH A BOOK (the story of Malala Yousafzai) national small scale tour.

1999 – 2012 Director of Roundabout and Education at Nottingham Playhouse
During this time I transformed the work of the department so that alongside the traditional Roundabout TIE touring offer to schools of curriculum orientated plays, the Playhouse provides a wide range of participation and learning opportunities. They include an extensive youth theatre programme, a unique work experience opportunity (Upstart), which requires the young people to actually make a play, pre and post-show discussions, a club for seniors who are mad about theatre, ACE Arts Award and the nationally renowned Critics Circle encouraging the reviewers of the future. Add in the university work, workshops in schools that support the curriculum delivery, representing the Playhouse in the European Theatre Convention and directing the occasional show for the main stage (The Caretaker, Roots and Tom’s Midnight Garden) made for a busy life.

1985 – 1999 Associate Director (TIE) at the old Wolsey Theatre in Ipswich
I directed four or five shows to schools every year, started a workshop for new writing and latterly took over the running of the Youth Theatre, most notably directing a production of Our Day Out.

Other work took me to South Hill Park in Bracknell, the Theatre-in-the-Round in Scarborough and my professional directing career began at York Theatre Royal where I spent five eventful years learning the job (1974 – 1979). In between times I’ve delivered furniture, acted a bit on television and radio, kind of brought up a family and have been an active athlete and orienteer. Just give me a map and compass and I’ll get lost! One of my great pleasures now is to look on and after my four grandchildren as they grow and discover the world.